How did I achieve a Blue Night

Blue Night was my first “Explored” photo on flickr. During this time I was still finding my voice in photography. That night I was drawn to the city for its amazing skyline. Being a resident of Queens, I’m only a short subway ride away. I went there with HDR (High Dynamic Range) in mind. 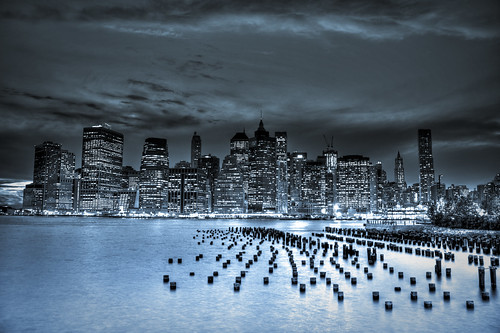 I was still very new to HDR and at that moment, but I was eager to keep learning since that was all I was doing at the moment: I wanted to find out what worked and what didn’t. To make this shot I took 3 different photographs. Each with a different exposure value (tripod or stable surface absolutely needed). One under exposed, another one over exposed and the last one was correctly exposed. To make the water overexposed for that “Ice Look” I used my ND slide filter covering the city only. Basically I used the darker part of the filter to cover the section above the shoreline and I intentionally overexposed the water so it appeared smooth.

I edited the photos using Adobe Lightroom. Being that they were night shots, I had to reduce the noise in each of the three photos. Night shots can have a “grainy” look, so it is a good idea to always make sure that when you shoot with a long shutter speed your ISO is low; something around 100 to 400 works well. I then exported the photos and loaded them into Photomatix (HDR software). After combining the photos in Photomatix I adjusted the gamma and smoothing sliders.  I didn’t want the photo to have a heavy HDR look so I went back to Lightroom for some processing. At that moment I was not happy with the results, It just didn’t look right with its natural colours. I decided to convert it into black and white; then I felt I was getting somewhere. Yet, something was missing.

Ever fall in love and not want to give something up?  With that feelin I went back to play with the colours adjusting the hue, which is the overall colour of the photo. I tried first red and yellow, then I found the blue. For some reason the blue had that look to it. I adjusted the highlights and exposure, just a little fine tuning for the sake of “perfection” and that did it. After all, we are our own worst critics…

When you feel that your photo has the potential to be a great photograph but it lacks a certain touch, don’t skip over it. Try to play around with it and use your imagination. Exaggerate colors and play around with the “big” picture. Don’t be afraid to get messy. I just did this and after a couple of hours playing around with it I was satisfied with the final result, then uploaded it to Flickr. To my surprise the next day it was “Explored”! No better feeling then that. Now I can’t tell you how to get “Explored”, that is a mystery beyond me. But I can tell you to keep shooting and get creative.

Have you ever been “Explored”? I want to know it! How about sharing it on comments?

One night in Gisborne, I had a feeling there might be a good shot out on the beach... so I headed out and walked for hours, listening to music and loving the stars. At some point, the surf was just right so that it receded far enough so it felt like I was walking on the stars.